Hardmen (and Hardwomen) Are Made – Not Born 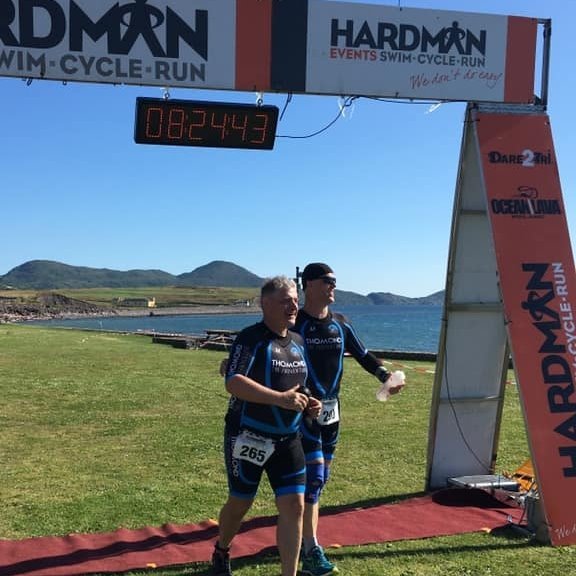 For anybody new to the sport, there is something quite, let’s be kind here—intimidating—about triathletes. They seem to spring fully formed from the womb, complete with wetsuit and attitude, and the idea that mere mortals could aspire to anything as lofty as a swim-cycle-run seems just ridiculous. It doesn’t help that Gordon Ramsay has competed TWICE at the Ironman World Championships at Kona…

But it turns out that triathletes can be nice, normal human beings; the kind of people you wouldn’t mind being stuck on a train beside for a long journey: We met Pa Mc and Pa Daly at the Killarney Olympic Distance Triathlon in September 2018 and have been following their progress ever since. Their story is inspiring for anybody who thinks you have to be born in a Deboer wetsuit to take up triathlons.

We caught up with the two Pa’s before they completed the Hardman Dingle triathlon this year to find out just what made them do it. Their reasons may surprise you.

“We always wanted to do a tri, but we could not swim, so when we decided to get swimming lessons a tri was our next step.” Simple as that. So had they always been into fitness? Well, not really. It turns out that they had been doing adventure races for a few years, but the novelty soon wore off, and they wanted to do something a bit more interesting.

How did they prepare for their first triathlon?

Selecting your first swim-cycle-run event is not easy, so how did the two Pa’s make their decision? It turns out that the swim was a major deciding factor, and that’s not really that surprising, given how many people are turned off triathlons by the swim. The two Pa’s picked the Tri Kingdom Come in Fenit for their first triathlon because the swim was short, and several people they knew were doing it as well. This is a good approach for anybody picking their first triathlon: Find one with a relatively easy swim, and don’t do it alone.

So what about training? Were the two Pa’s up before dawn and out every evening in their efforts to get on the tri saddle? It turns out they were as sensible about this as they were about every other aspect of their Tri triumphs: “Training for us is a bit hit and miss, as we work funny hours. Most of our training is done over the weekend if we are off work.”

Advice for Other New Triathletes?

Both Pa Mc and Pa Daly would approach their training differently now, however. In fact, if they were going to start all over again, they would look to the experts. “We would probably talk to Mick from Keogh Fit about a proper training plan and nutrition that would guide us better.” Apart from that, they would advise anybody thinking about triathlons to just go for it.

“Give it a try, you have nothing to lose. Always remember quitting is an option but giving up isn’t.”

And if you are thinking about a triathlon, why should you pick a Hardman event?

“Hardman Ireland events are, in our opinion, the best-run tri events in Ireland.” High praise indeed, but what makes them so sure a Hardman event is the triathlon event for a novice? It’s certainly not because they are easy: “They give you a kick up the backside, but the buzz when you get to the finish is unreal. The guys at Hardman events are a pleasure to deal with and give you encouragement along the way to achieve your goal.”

Thinking of doing a swim-bike-run event, and haven’t been born with a silver derailleur in your mouth? Maybe it’s time to take the plunge and sign up for a Hardman event?

You might even meet the two Pas. They have signed up to do the full Hardman in 2020.